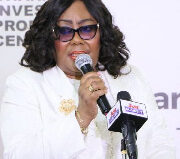 CDD-Ghana to petition CHRAJ over corruption allegations against Deputy MASLOC...
Scroll to top